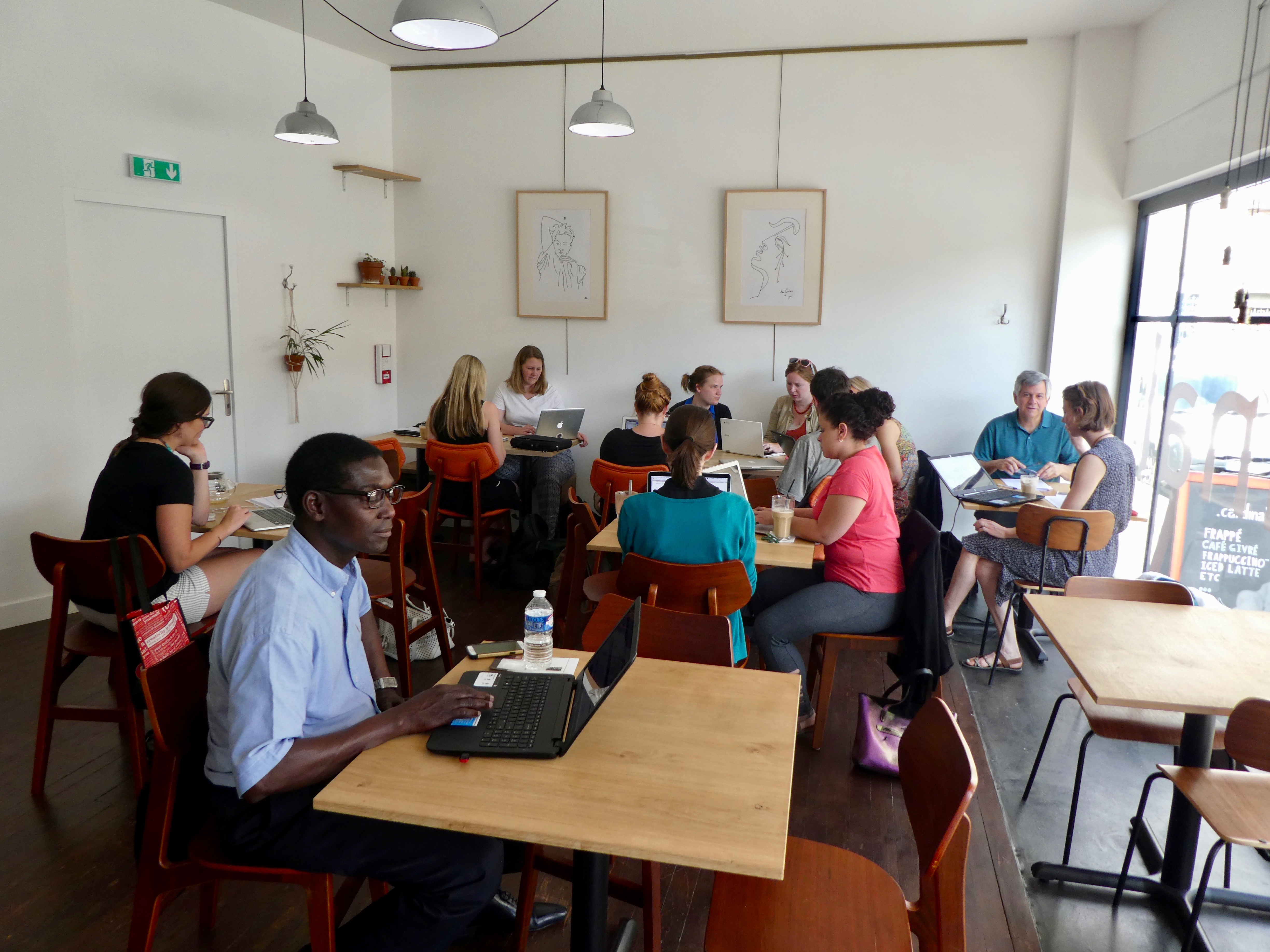 The Summer Language Institute/MA in French Language Teaching has a unique curriculum designed by teachers to maximize your potential as a language teacher. Through courses on language acquisition and pedagogy as well as language and culture courses, you will improve both your language proficiency and cultural understanding while becoming a better teacher. The curriculum has three types of courses:

The descriptions below give you more details on each of these types of courses.

The Summer Language Institute for French Teachers offers you the opportunity to earn a Master of Arts in French Language Teaching (a total of 48 quarter credits) over three summers. You may earn up to 18 credits each summer.

A minimum of 16 credits in Core Pedagogy Courses:

A minimum of 16 credits in Core Pedagogy Courses:

A minimum of 28 credits of French Language and Culture courses:

A minimum of 28 credits of French Language and Culture courses:

These elective courses vary each summer, providing students with a variety of options. They are designed to build students' linguistic and cultural knowledge and enhance their pedagogical skills. Each of these courses is accompanied by a pedagogy course (2 credits) The following are examples of courses taught in the past.

During the school year prior to your final year in the program, if you are a masters candidate, you will conduct an action research project with your own students/at your own school. You will write a 30-40 page paper (plus bibliography and appendices) documenting the project. The action research project, presentation and paper take the place of a thesis project, and are graded based on the AR project rubric and the AR presentation rubric.

The goals of the course are to equip participants with up-to-date knowledge of best practices in assessing foreign language development and to provide them with meaningful opportunities to practice creating assessment tools and evaluation criteria in a collaborative setting. The approach to assessment emphasized in this course is multidimensional and Standards-based. Course participants complete a portfolio of assessment tools for classroom use, including an Integrated Performance Assessment.

During the school year prior to your final year in the program, if you are a master’s candidate, you will conduct an action research project with your own students/at your own school. You will write a 30-40 page paper (plus bibliography and appendices) documenting the project. The action research project, presentation, and paper take the place of a thesis project and are graded based on the AR project rubric and the AR presentation rubric.

Transforms knowledge into practice about Second Language Acquisition (SLA) and pedagogy, while focusing on the use of technology in the foreign language classroom. Fosters professional development as students formulate critical skills for creating, integrating, and assessing technology into the classroom. Topics may include interactive and non-interactive hypermedia technologies, Computer Assisted Language Learning (CALL), language testing and technology, distance learning, online discussions, and software selection.

Provides a brief introduction to data analysis with the goal to help you analyze the data you gather for your Action Research Project.

Introduces students to research methodologies that pursue action (change) and research (understanding) concurrently. Students will learn how to do a systematic inquiry into the teaching/learning environment of a classroom with the goal of developing reflective teaching practices. This course is intended as preparation for an action research project that students will conduct over the course of the following year.

Students must choose both "a" and "b" of one course-grouping.

1a. FR 528 France's Social Classes Through History and Satire

1a. FR 528 France's Social Classes Through History and Satire

Disparity in social classes has been and continues to be an intrinsic part of France’s structure, with terms such as “bourge” and “prolo” still painting an unflattering portrait of the country’s privileged and underprivileged populations. What is also typical of French society is its ability to make fun of itself and the “other,” which it does through all forms of literature and art. This course will explore the social satire aimed at denouncing social classes, as well as political and religious antagonist views throughout the ages. We will analyze social satire through films scenes and novel excerpts, songs, poems, and cartoons, from the hierarchical structure of the Middle-Ages to today’s still existing concept of “chambres de bonne” (Les Femmes du 6e).

Students’ understanding of the topic will be assessed through two short reaction essays and a final project.

1b. FR 516 Teaching Forms of FL Writing on Social Issues

1b. FR 516 Teaching Forms of FL Writing on Social Issues

Foreign language writing has been called the most challenging modality to teach by teachers, and often students’ weakest skill area. Content-focused writing is all the more difficult when students are simultaneously learning new cultural concepts as well as the language to communicate about them. This course explores how to teach forms of writing in French that relate to the themes of social classes in France. We will relate these themes to interpretive communication (e.g., how to create engaging prompts to scaffold students’ responses in writing to video/written texts), interpersonal communication (how to carry out genre-based writing techniques related to email/letter writing), and presentational communication (how to design writing-to-speak assessments for persuasive text genres). This course will be conducted in French and class time will be dedicated primarily to workshops that provide course participants time to plan, draft, and receive peer and instructor feedback on three required portfolio components.

This course proposes to discover the mechanisms and the reasons of an ecological awareness becoming today a sort of dominant thinking in France. Ecology is “the economy of nature,” according to the naturalist Carl von Linné—that is to say, the awareness that the planet is unique and that it has limited resources.

This perception of life and society, though marginal 50 years ago, has gradually become central in political and media discourses, partly through controversial means of struggle. Electricity production, urban planning, transport, purchases of everyday products, or waste management, agriculture, and food ... are just a few examples of the many areas impacted by the demand for environmental respect. However, some decisions to protect nature sometimes trigger heated controversy.

The evaluation for this class will include attendance, an individual oral presentation, a test on specific points discussed in class, and an essay.

2b. FR 516 Environmental Pedagogy and Pedagogical Environment: Towards the Speaker/Social Actor

2b. FR 516 Environmental Pedagogy and Pedagogical Environment: Towards the Speaker/Social Actor

Issues surrounding the environment and sustainable development have become a sensitive issue, especially in the current political climate. They are nonetheless the major issue of the 21st century. Based on contemporary theoretical writings and using the United Nations’ Sustainable Development Goals (SDGs) as a point of departure, this course will examine how to design and deploy pedagogical practices based on a variety of pedagogical materials and approaches. Starting from "the everyday and the lived", we will also examine how to transform our learners into speakers-actors, that is to say, citizens who exercise a certain agency on their social contexts, so that a pedagogy of the environment also becomes a pedagogy of social action. This course is a workshop and students will be evaluated on the project (activity) they design for their own students/school.

In this course, we will study the role of food and gastronomy in France. Beginning with a historical approach, we will review the development of French cuisine and how food culture contributes to the French national identity. We will focus primarily on the role of food and cuisine in contemporary French culture based on articles, excerpts from literary texts, films or video clips, and class visits by those who work in the food industry. We will also visit some local food-related businesses in the community: the market, a bakery, and a chocolate factory, to take full advantage of being in France. The final project will be a research project, presented to members of the class the last week of the course.

3b. FR 516 Integrating the Gastronomy of the Francophone World into the French Classroom

3b. FR 516 Integrating the Gastronomy of the Francophone World into the French Classroom

This course will bridge teaching theories and practices by exploring the possibilities that the food and gastronomy of the Francophone world offer a French language classroom. Specifically, students in this course will develop instructional materials and practices to foster language learners’ intercultural communicative competence by investigating, explaining, and reflecting on diverse perspectives about food (products and practices) from the cultures studied and their own while using the target language. Expected course outcomes include a Standards-based instructional unit, comprised of two lessons incorporating a range of student learning activities and assessments. Coursework will be built around the readings and discussions from FR 528: À Table Citoyen! Gastronomie, Culture, et Identité. To expand upon FR 528 content linked to the gastronomy of France, FR 516 students will additionally investigate and consider food and eating practices across the Francophone world.

4a. FR 528 Childhood in Literature and Film

4a. FR 528 Childhood in Literature and Film

In this course, we will explore representations of children and childhood in literature and film of the twentieth and twenty-first centuries. How have changes in society and developments in our scientific understanding of childhood and adolescence affected the way we see children? The way we treat and educate them? We will explore themes related to psychology, family structure, evolving roles of women, school systems, social services, and the impact of colonialism, decolonization, and globalization.

This course will have a final exam, consisting of essay questions/responses in French.

The aim of this course is to explore and put into practice the linguistic gains that can be made from playing in the foreign language classroom. We will focus on varieties of language play often associated with child play, including wordplay (jokes, riddles, rhymes, tongue-twisters), kinesthetics, role-playing, improvisations, story-telling, and puppet performances. Class time will be devoted to demonstrating these language play categories and examining which ones are well-suited for particular learning objectives. Everyone will be asked to bring a unit from their home curriculum, which the teacher and/or the students found dull, stressful, or difficult. Over the course of the session, class participants will create and present a series of mini-modules exhibiting different types of language play that could be incorporated into these existing lessons. These mini-modules will be collected and annotated culminating in a final Language-Play Enhanced Unit. This course will be taught in French.

Addresses selected topics in French grammar, with particular focus on grammatical difficulties for English speakers with the goal of helping students improve proficiency in the language. Course conducted entirely in French.

(1 credit. Up to 3 credits may be applied to degree requirements.)

Designed to improve French conversational skills by focusing on linguistic functions appropriate to student levels. Students will narrate and describe, state and support opinions, and hypothesize using current events and topics from contemporary French culture as the content of discussion.

(1 credit. Up to 3 credits may be applied to degree requirements.)