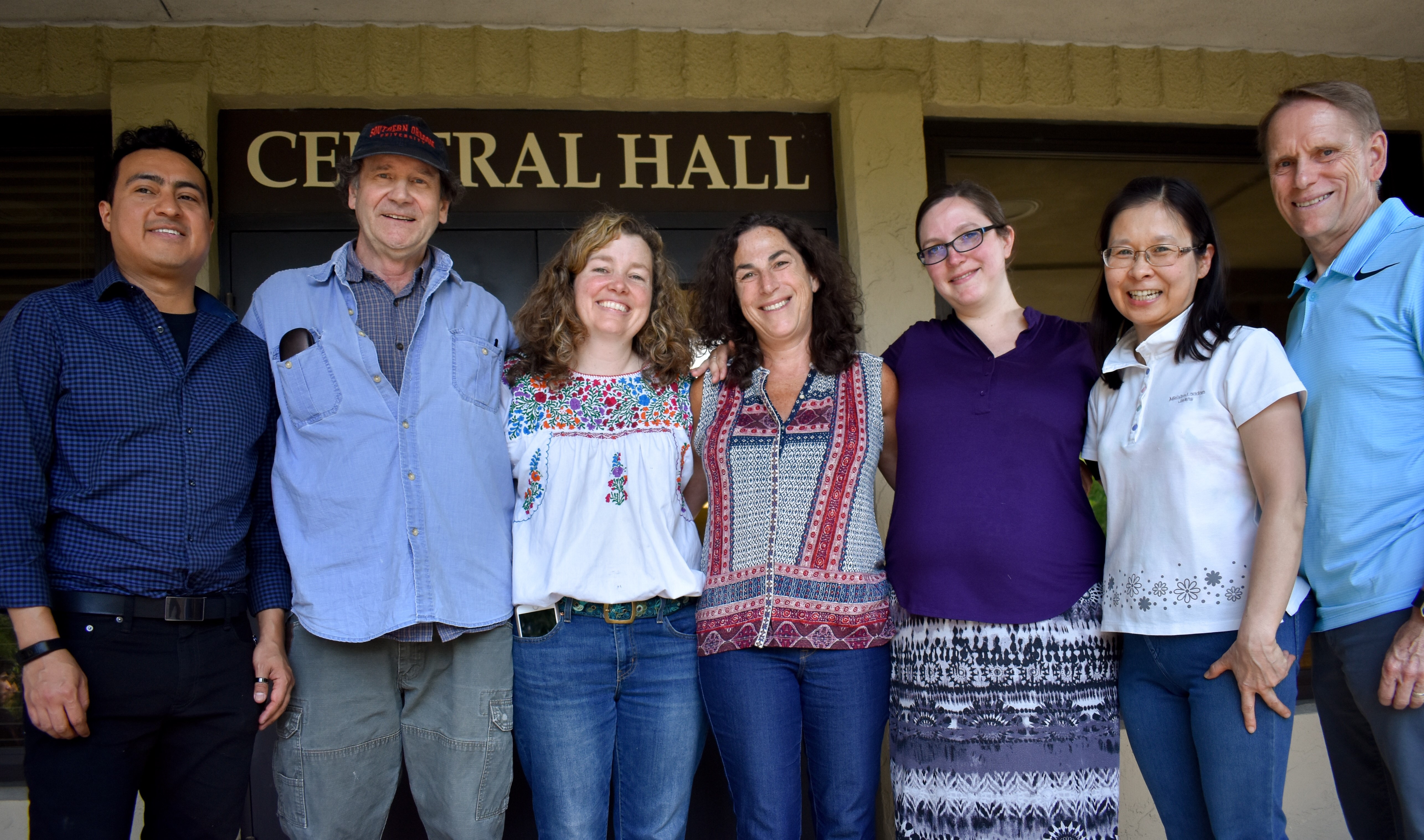 Our faculty at the closing social event for the 2017-2018 school year.

Dr. Enrique Chacón is Assistant Professor of Spanish. His main focus is Mexican Literature and Culture. He approaches different contemporary topics from the Cultural Studies perspective as well as Critical Theory. He has studied humor in Poetry as well as the Narrative and Intellectual production in the second half of the 20th century in Mexico, paying special attention to the figure of Juan García Ponce. His current research includes the representations of violence in Latin America and US Latino Culture.

Dr. Bonnie Christina Holmes is Assistant Professor of Spanish. Dr. Holmes is an applied linguist whose work centers on Spanish language acquisition and bilingualism in the US. Her recent research investigates how Spanish is processed cognitively by heritage bilinguals, and how high impact practices such as service learning can enrich the language learning experience while also strengthening the community. More generally, her overarching goal is to support Spanish language acquisition, maintenance and revitalization efforts both locally and nationally.

Dr. Sullivan, a former Peace Corps volunteer, lived 4 years in Costa Rica, followed by 18 along the U.S. Mexico Border. From 1992 until 2000 he was an instructor of Spanish and ESL at El Paso Community College where he also coordinated student and faculty excursions into the Mexican interior. Brian then worked as an Assistant Professor of Spanish and Teaching Methods at Keene State College of New Hampshire - a similar post he eventually held the first time he was hired by SOU (2003-2005). After another year of teaching and doing research on the Border, Brian returned to SOU in the fall of 2006 to teach Spanish. In his spare time, he translates and writes his own creative work.

Lady Vanderlip was born and raised in Las Lomas in the outskirts of David in the province of Chiriqui, Panama. She is the youngest of four children, graduated from La Escuela Primaria Victoriano Lorenzo and Colegio Felix Olivares Contreras, and has a degree in Public Administration from La Facultad de Administracion Publica, the University of Panama in Panama City. Lady is also a certified translator and has a Master's Degree from Southern Oregon University.

Dr. Marianne Golding, (Ph.D., University of California at Los Angeles) received her Ph.D. in French Literature from UCLA and is Professor of French at Southern Oregon University, where she has taught since 1998. A native of France, she teaches beginning through advanced French courses and is particularly interested in Autobiography, Feminist Literature, and Francophone Literature, Culture and Film. In addition to various articles and conference presentations, she authored the second edition of The Graded French Reader.

Rosemary Tutland (M.A., University of Wisconsin-Madison) is an adjunct professor of French at Southern Oregon University. She received her Master’s Degree in French Literature in Wisconsin and taught at Augsburg College in Minneapolis before continuing her career in the high school setting where she taught beginning to advanced courses. She was also involved in directing and acting in French language theater with the group “Les amis du théâtre” in Minneapolis/St. Paul. She teaches beginning French courses at SOU and enjoys incorporating music, movement, and creativity in the learning experience.

Dr. Daniel Morris is Professor Emeritus of French and Director of the French Summer Language Institute (Session II). A certified French OPI tester and trainer for the American Council of Teaching of Foreign Languages, Dr. Morris has written articles and given conference presentations on French literature, culture, film, and language pedagogy. He is the founding director of the Southern Oregon Foreign Language Articulation project (SOFLA), and has organized and led numerous workshops for high school language teachers. Current research interests include French and Francophone literature, French film, French language pedagogy, and the impacts of globalization on culture.

Steve Wasserman (M.A. at California State University Northridge) is an Assistant Professor of American Sign Language (ASL), teaching both beginning and intermediate ASL since 2003.  He has long been an advocate for ASL and helped to expand the popular ASL classes to a two-year program. As a Deaf/HH (hard of hearing) person himself, he brings his awareness of Deaf culture and his own bi-cultural experiences to the classroom.